It was an ordinary evening for both of us. I was in the kitchen, busy with the usual chores. He poured some wine for us and sat on the shelf beside me. With every sip of wine, I could feel the mood turning up almost like a romantic
battle and very soon we were in the bedroom, and ready for the first experiment.

I had recently purchased domina (the vaginal condom) by Pee Safe. I knew this was the right time to try it. At first, I was a little shy to wear it in front of him, but then there is a quote by this brand, which was stuck in my mind “TAKE CHARGE”. This rushed my adrenaline and in the next moment I was holding the condom packet. I looked at him and ripped the packet. As per instructions on the manual, I placed the condom inside my vaginaThe vagina is a flexible and muscular reproductive organ in ... More. It is not as complicated as I thought it would be. He was just staring at me, with his mouth open and eyes full of lust. The whole moment and visuals already turned him on like never before. We were using a vaginal condom for the first time and I had to guide him a little bit in the start.

The next few minutes were the best minutes of my entire day. I didn’t realise the outer ring of the condom adds extra pleasure for the woman. He doesn’t like to stop in the “heat of the moment” to look for a condom, open the packet and then put it on. It just kills the fun.

But now thankfully we found domina as the answer to our uninterrupted pleasure and from there on, it’s me
who takes charge every time. There has been no comeback from that point of comfort and pleasure till date.

LoveLove is a feeling of closeness, intimacy, affection, or gene... More Is For All! 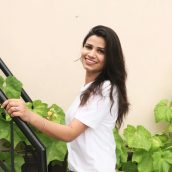 Why wasn’t sex education as important as Geometry or the (godforsaken) Home Science?

We interviewed someone who had received formal sex education in one of the best schools in Delhi and here’s what he had to say….