Mistaken identities? What do you mean?
I know what’s a VaginaThe vagina is a flexible and muscular reproductive organ in ... More!! Wait a minute, I have heard the word VulvaThe vulva is the external genitalia consisting of clitoris, ... More, it’s some part of my you know.. the whole thing! Well, what do you do.. the female anatomy is as mysterious as the female brain. And that is exactly why the Vulva has always been confused as the Vagina. Vulva is the outer part of a woman’s genitals that is visible to you. The size, shape and color of vulva can vary considerably from woman to woman, and hey! That’s totally normal. Now wait, Vulva doesn’t just exist alone, it comes in a package.

Meet the Labia twins-
The outer labia, also known as the Labia Majora, is the outer part that you tend to see and is covered with pubic hair (exactly the point when we scream during a bikini wax session.. yup.. that one!!) The Labia Majora’s job is to protect the more sensitive parts inside. The Outer Labia is another set of labia called the Labia Minora or the inner Labia or “lips,” as we all lovingly call it and is present right inside Labia Majora. This part of the labia feels and looks different, it is softer, wet and hairless and protects the urethra from outside elements like dirt and bacteria. 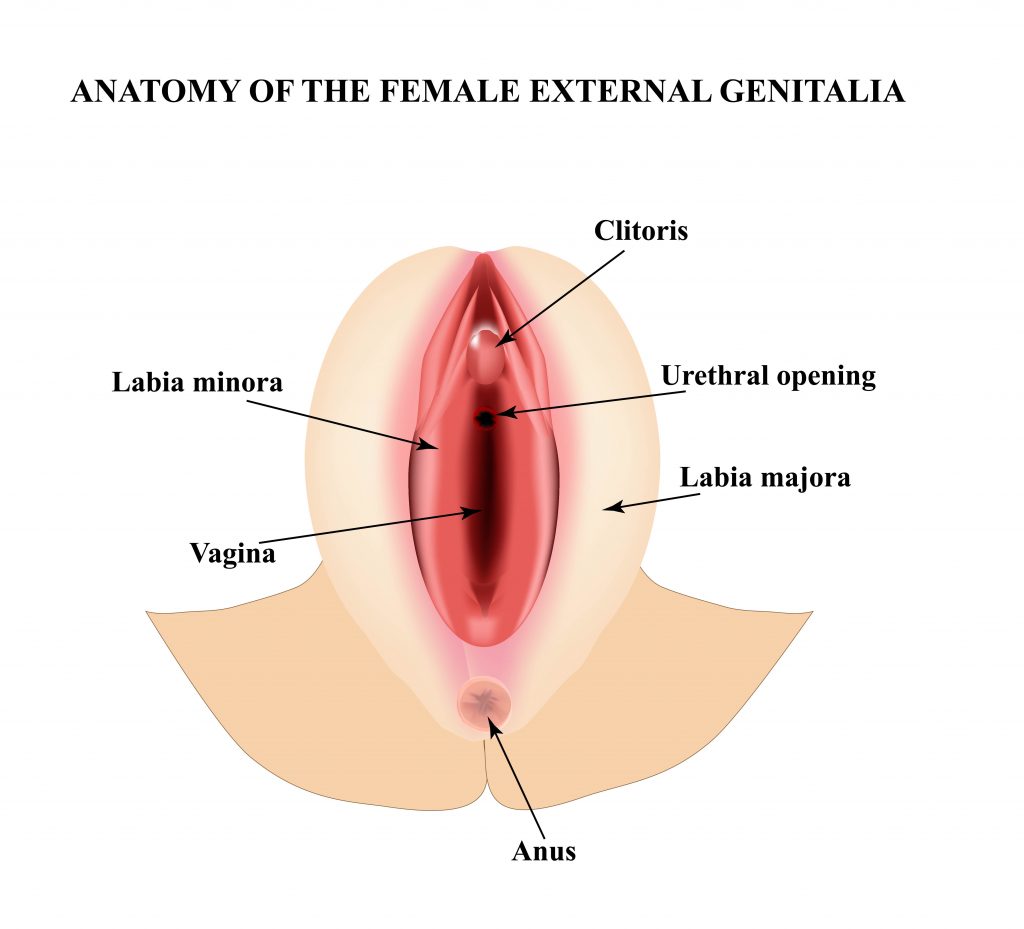 Then there’s Ms. ClitorisThe clitoris is the epitome of sexual arousal. It is the poi... More
The only part of a woman’s body exclusively designed for sexual pleasureDuring sexual intercourse, the partners involve experience d... More. It has over 8000 individual nerve endings (the penisThe penis is the most common reproductive and excretory orga... More only has 4000. Booyaah boys!!) The Clitoris looks like a pea sized mound and sits on the head of the Labia twins. Being a highly erogenous zoneThose regions of the body that are sensitive to sexual stimu... More, it clearly deserves to be seated at the top of everything (don’t you think?!!). Afterall, it has an important role to play. A clitoral hood keeps it slightly covered and protected, as it is an extremely sensitive zone. Did you know, indulging in clitoral pleasure is also a popular way to achieve an OrgasmIt is a state of deepest sexual pleasure during which the bo... More, if you ain’t the penetrative sex leading to Orgasm types.
Vagina on the other hand is the canal-like structure located inside the labia. It is a part of the internal female reproductive organs which also include the Ovaries, Fallopian tubes, Uterus and Cervix. Now here’s a fact why Vaginas are so cool- Not only do they create their own lubrication (self-sufficient I must say) when sexually aroused, but can expand to double its size during penetration. Isn’t it interesting how a Vagina can accommodate a tampon, or a menstrual cup, a penis and above all push out a baby during childbirth! Here’s another fact- The average Vagina is between 2.5 to 3 inches wide and 2 to 4 inches long, it can stretch up to 200% because the vaginal walls are nothing but muscles that contract when resting and expand when it comes in contact with something. Mind blowing, isn’t it?!

Just like Vulva, Vagina comes with its own army personals.

G-SpotIt is known as the female prostate. It is hard to locate som... More (or the Glee Spot!)
Let’s just say the G-Spot is the exotic honeymoon destination tucked away in a remote corner of the Vagina island, which is a little tricky to find, but not impossible. It is an integration of tissues located inside the front wall of the Vagina and is known to be sexually sensitive for some people. The G-Spot can feel like a spongy mound when touched and tends to grow slightly if aroused. It’s believed a G-Spot stimulated Orgasm is far more intense than a clitoral one. So for all the adventurous ones out there, this is an area one should not miss, when exploring.

Uterus- the Mother Ship
Also known as the womb, where babies are formed and grow until they are ready to be born. When not pregnant, the Uterus has one more important job to do, every 28 days until a woman hits MenopauseThis is a phase when women are no longer ovulating or having... More. Of course, the mighty Periods. Buried deep inside your abdomen, the Uterus provides structural integrity and support to the bladder, bowel, pelvic bones and organs as well. It separates the bladder and the bowels.
Cervix – the connecting tunnel
Being the lowest part of the Uterus, it connects the Uterus to the Vagina and provides a passage literally like the tunnel between the 2 cities. Made up of fibrous tissues and muscle, the Cervix is the passage that expands during labor and dilates up to 10cms, to let the fetus pass through.

Ovaries- the mood swing creators
Women have 2 Ovaries and their main job is produce healthy eggs that go floating down the Fallopian tubes right into the Uterus. These eggs settle here for a couple of days, hoping to make some new friends, called the Sperm, further hoping to make a baby. If not, the eggs disintegrate along with the lining of the uterus (aka Endometrium) and are shed off during the Periods. The Ovaries also produce Female Hormones called Estrogen and Progesterone (watch out men, this is when you back off.. like wayyy off!!)

This pretty much covers the length, breadth and depth of the Female Reproductive Anatomy. And hopefully by now, you all know, why Vulva is Vulva and not Vagina.

A beginner’s guide to Kegel Balls